Start a Wiki
And Martha Stewart Have a Ball (Part 2) is the season finale of the first season of 2 Broke Girls.

After Sophie helps them get proper evening clothing, the girls are forced to ride Chestnut to the ball when Oleg's car breaks down. They are stymied by the same party planner who rejected them in Part 1, as Caroline is not on the list. Max, however, comes up with a plan to sneak in. Han reveals that he used to be a jockey.

Following on from the previous episode , Sophie takes Max and Caroline dress shopping so that they can get their hands on some ball gowns. Once they are dressed, they gather at the diner for a photo op, where Han tries to hide his short statue by standing on his toes.

As they are prepairing to leave, Earl shows up and preseants them with flowers to wear on their wrists. As Oleg starts to drive them away, however, their car breaks down.

After waiting 45 minutes for a repair, Han shows up on Chestnut, having taken him from Max's apartment. Max and Caroline ride him across the Brooklyn Bridge and, after flirting with a couple of cops, make it into the ball. Sadly, they are rejected by Paul Platt, so Max decides to sneak in the back way, having catered the event last year. On the way out, Caroline is assualted by a woman in a fur coat.

Sneaking in the backand dressing up as cateres, they use a food cart to smuggled their dresses into the bathroom. Max is able to change, but Caroline is forced to wait because all the stalls are full.

While chnaging, Caroline starts to talk about Marthta Stewart, unaware that she is in fact in the bathroom and can hear everything. Martha likes the girls drive, revealing that she has five copies of her cookbook hidden in her purse. She agress to taste the Spring Break Cupcake, and likes it, suggesting it would be popular with stoners. Max and Caroline celebrate having been able to meet Martha.

In a sub-plot, Johnny shows up at the diner, informing Max that he is getting married, and recives a cold reception. Max encounters him again at the ball while waiting for Caroline to change, where she finally puts an end to their relationship. 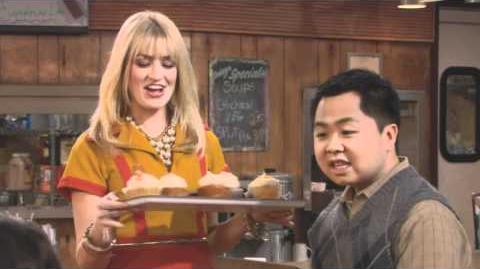 Retrieved from "https://2brokegirls.fandom.com/wiki/And_Martha_Stewart_Have_a_Ball_(Part_2)?oldid=17702"
Community content is available under CC-BY-SA unless otherwise noted.