And the Break-Up Scene

And the Break-Up Scene is the second episode of the first season of 2 Broke Girls.

Caroline thinks she's doing Max a favor when she takes it upon herself to facilitate her break-up with Robbie.

Max and Caroline are living with one another and they are going through some issues with boundaries. Caroline simply does not have any, while Max has many that Caroline needs to respect. Max has made delicious cupcakes and Caroline would like to have her name included on the product. Max is really not into that idea. Not only that, but Caroline thinks that Max is trying to hide her feelings about the Robbie situation from her.

She thinks that Max should be honest and open about it. Max is not the kind of girl that opens up easily, which of course instigates sarcasm and a serious attitude.

Caroline is now sleeping in Max’s bed, alongside Max. She learns that Max sleeps with a knife for protection. Robbie comes by and walks in as the two of them are lying in the same bed, because he doesn't seem to get that they are broken up. He then says that although he did not know what was gong on, it would have been a lot sexier with him involved. Caroline takes it upon herself to tell Robbie to leave and not come back. She gives him his belongings and tells him to go. Max is not happy about this, because she wanted to give him his stuff back and tell him that he couldn't do better. She said that it was the best part of a breakup, and that Caroline took that from her.

Caroline gets sick of all Max's sarcastic insults about her father, and Max's anger at Caroline getting herself involved in her relationship. Caroline leaves and inevitably comes back completely trashed and apologizes. Max apologizes to her for what she said and admits that she overreacted about the sign for the cupcake business. 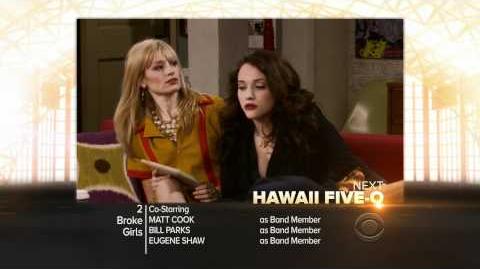