And the Extra Work

And the Extra Work is the twenty-second episode of the second season of 2 Broke Girls.

Max and Caroline are invited to be extras on a popular TV show shooting a scene in Han's diner, but when Caroline catches the director's eye, he offers her an actual role - with strings attached.

Max mentions how she knows a guy from Oktoberfest who’s a blacksmith. Yes, very random, but whatever works, right?

When Max comes into the diner, she relays to Caroline that the blacksmith she once knew now resides in an artisan barn with a lady who makes clothing out of bees. The blacksmith lets Max know that Chestnut has bigger problems: he has a hoof fungus and needs four new shoes. The cost? Fourteen hundred dollars! A casting crew comes looking for a shooting location for Law & Order: SVU. Earl makes a quip about that many White people entering the diner making him nervous.

Caroline points out that one of them is Asian to which Earl nonchalantly says, “Same thing.” Tom Woo, who looks to be the casting director, introduces himself to be from the popular television show. The moment Caroline gets a glimpse of the handsome director she’s instantly smitten by his ruggedness.

DJ Kingsley introduces himself to the girls but sees Earl to comment on how his face would suit the show. Max volunteers to be on the show, too, but when the director talks to Caroline, he instantly compliments her.

Caroline, being Caroline, lists her “credentials.” Where have you seen Caroline in? In high school, she portrayed Fantine in Les Misérables.

Tom Woo lets the girls know how much they would be getting paid. That means that Caroline and Max would be able to afford veterinary fees for their horse. The casting director talks to Han to see if he would allow for the diner to be used as a shooting location. Max tells Tom Woo that even if Han says no to the proposal, he doesn’t mean it. Han just wants you to flirt with him a little bit.

When Han starts talking in Korean to Tom Woo, the casting director looks at him funny and says he’s from Pasadena. During the shoot, DJ Kingsley makes flirty comments at Caroline and invites her to his hotel, but Caroline isn’t too keen on having dinner.

Max points out the obvious when Caroline is hired as the main waitress when another waitress drops out. Caroline is only billed top waitress (although Max could be considered a better actress) because the director likes Caroline. However, when Caroline insists that Max tag along with her to the hotel, all bets are off when the director doesn’t mind some action with Max, too.

On top of the sleazy situation, Caroline and Max overhear DJ Kingsley talking about his wife and kids. Caroline clarifies with the director that she isn’t comfortable with the circumstances, and DJ Kingsley looks to be fine with it, yet the next day when there’s a reshoot, the director uses Max as the main waitress on the show instead of Caroline.

While Caroline tries to get in the shot, it looks like she’s not the only one who messes up the shoot altogether at the diner.

Sophie, who had wanted to be part of the shoot earlier, emerges from the craft service room to demand a part. When Sophie attempts to ruin the shot to talk to the director in regards to a potential role, Tom Woo stops her but bumps into Caroline, who accidentally hits the button that sets off the fake gun shots which explodes in Max’s bosom. It’s safe to say that the girls won’t be featured in an episode of Law & Order.

Nevertheless, did Caroline and Max get the money for Chestnut’s veterinary fees after all? 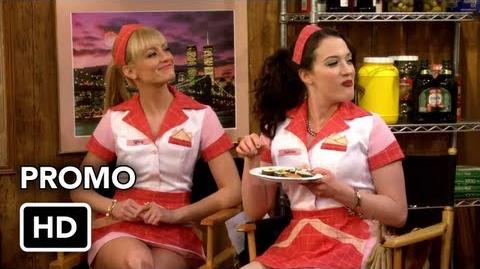 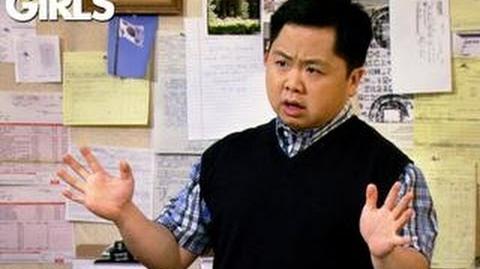 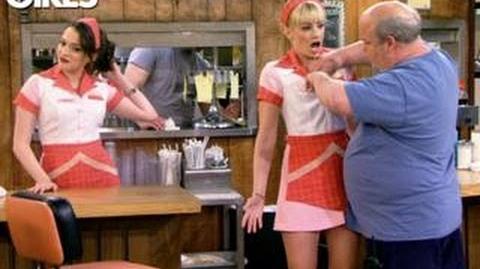