And the Secret Ingredient

And the Secret Ingredient is the thirteenth episode of the first season of 2 Broke Girls.

While immersed in her couponing obsession, Caroline learns the secret ingredient in Max's cupcakes.

We open at the diner, where a rude customer is demanding Munster cheese. Max tells him their out and Caroline offers him more choices and a menu, but the guy keeps on being rude, so Caroline tells him off. Next, Max asks Earl about his plans for the next day. He says his plan is not to die in his sleep and Max says she’s going to visit Chestnut. She tells Caroline about this and the many train rides to take to see him. A woman named Rhya comes in and asks for a tampon. Caroline gives her a quarter to get one from the machine in the bathroom. Rhya comes back and says the tampons are actually 75 cents. Max says they’ve always been 25 and goes back to check the price. She sees the price has been raised and calls Han back there and voices her disapproval. He gets uncomfortable and leaves, and then Caroline tells him the 200% hike in the price is unfair and tells him he’s taking advantage of women. Han tries to get Earl on his side but Earl doesn't agree. Max then demands he roll back the price.

At a grocery store, Max grabs a birthday card for her mom, which is actually a “get well” card which she says describes their relationship perfectly. Max then grabs 10 things of cake mix and Caroline is shocked to see that Max uses cake mix and doesn't bake from scratch. Max says she only uses it when she’s tired. Over at the register, Max shows Caroline some carrots she got for Chestnut. The total for their trip is $70.49 and Max pulls out her coupons. Caroline is shocked to see that Max uses coupons and offered to use her tip money instead. Max uses the coupons and gets the price down to $12.70 and Caroline then calls coupons genius. Back at the apartment, Max is making cupcakes and Caroline comes in with 15 chicken pot pies she got for free using double coupons. Caroline also talks about how she found a woman online named the “Williamsburg Coupon Queen” and a coupon for edible arrangements for 40% for Max’s mom. She also pulls out a super pack of tampons.

Back at the diner, Max is putting the tampons in the straw dispenser. Han tries to stop her but he can’t even say the word tampon. Max, again, tells him to drop the price and Han, again, refuses. After Caroline comes in with a bunch of double coupons for cake mix, Max gives a couple women at the diner free tampons with their checks. She then starts to make a speech about Han raising the price, which cause Han to finally agree to lower the price. Earl calls Max the Norma Rae of feminine hygiene. Back at the grocery store, Max again tells Caroline she can’t believe she’s choosing coupons over Chestnut again. Caroline then recognizes the “Williamsburg Coupon Queen” in the store and goes over to say hi. She tells her about the cake coupons and the woman says that they’re rare. The woman then starts sweeping the shelves of the cupcake mix, which leads to the women fighting with their carts and knocking a man over.

At the register, Caroline counts 39 boxes of Duncan Hines cake mix and needs 1 more to get $23 back with her coupons. 1 box turns out to be Pillsbury, which Max reveals is the secret ingredient in her cupcakes. Max then admits that she doesn't know how to bake from scratch and storms out to see Chestnut. Max goes over to see Chestnut at the stables and talks with him about Caroline. Caroline then comes back and says she got the $23 and the Pillsbury mix. She apologizes for going coupon crazy and tells Max it must have been hard for her to learn everything on her own. She also says its how Max has fought that makes her who she is. Max then makes a joke that the real secret ingredient in her cupcakes is chocolate methamphetamine. The total for their cupcake shop is $644.25. 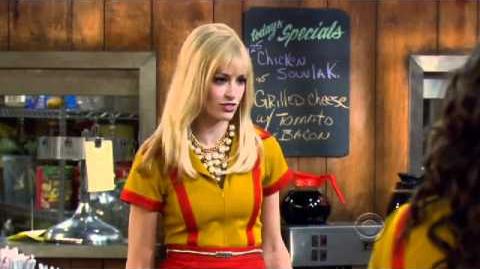