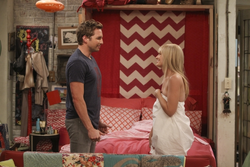 Started Dating
And the Candy Manwich
Intimacy Level
Sexual
Dating Status
Broken Up in And the Bear Truth
Ship Name(s)
Carody, Andiline
Been Together
8 Episodes

Caroline-Andy Relationship is the relationship of Caroline Channing and Andy, which was formed in "And the Candy Manwich". They broke up in "And Too Little Sleep". They then had a one-night stand in "And the Worst Selfie Ever".

And the Three Boys With WoodEdit

Caroline wants to have sex with Andy, but he can't because he discovered her ex-billionaire identity, due to Max. He starts acting weird, sending emojis which leads Caroline to think he is gay. To prove her wrong, Max suggests her favorite cheap girl bar, Just Slip it In. She goes there with Andy and she shows Andy and she proves she is sexy, which he believes after giving Jacob an orgasm which resulted in him being in hospital.

Caroline and Max get their blurb in Martha Stewart Living, and she tells Andy about it. Andy isn't that concentrated in the blurb due to the massacre he witnessed some time ago. Max, then intregued, goes in and sees it, with Caroline and Andy. Andy feels grossed out, and leaves Max and Caroline together.

Andy visits Caroline and Max in the diner and they start kissing. He asks if they are getting together after work and she says no, since they have lots of work to do. He then starts dancing and Caroline joins in and then they kiss. He suggests they get an intern to help set up the shop, and that they have mice.

We then see them in bed together, before Ruth comes in and gives Max an enema.

Andy comes to their shop and tells her about his day. She then questions' his dress choice for their big shop opening, and he runs home and gets something else to wear. He then comes back in the same clothes when the shop is full and Caroline thinks its hot that he doesn't obey her. They then kiss. They're then forced to clean up the party mess after Max left with Johnny.

Andy goes to the diner to tell Max that he is going to say to Caroline that he loves her. Max helps him choose the best scenario to tell her, since according to her the diner is a horrible place. Andy then goes to his shop and sees Caroline and Max dressed up as cupcakes. He was going to tell her he loves her, but she ran away because she saw her friend Stacie. Caroline runs into his shop after Max told her that he wanted to confess to her, and sees him on the toilet. Embarrassed, Andy tells her he loves her.

Andy comes to the diner and tells her about the landlord. She then lies, and tells him it's online payment. Andy then sees her at a weed central, and she climbs out of the window, paranoid and embarrassed. The next day, we see them discussing about the events that happened last night. He offers her money, but she declines. They then kiss.

Max's Homemade Cupcakes win a trip to a lodge, and Caroline brings Max and Andy, by both calling them 'the third wheel'. In the car, Andy calls her adorable when Max calls her annoying. In the lodge, Caroline talks about the shop, and forgets it's his birthday the next day. Since there are only two meals, Andy tells Max to go to their neighbors, while they have a romantic time. In doing the process, Max "so-called accidentally" blurts out that it was Andy's birthday and she forgot. She tells Andy about the shop and says its shocking how she 'remembered the shop's date but not his birth date'. Andy leaves and finds his way home. In the diner, Caroline makes him a cupcake with a candle on it. He then breaks up with her, and walks away looking regretfully back.

And Too Little SleepEdit

Andy visits the store, and Caroline runs away from Max to talk to him. They are good friends and still text each other all the time. Caroline is a bit angry and refers to the "girl code" that Max shouldn't talk to Andy anymore. In the diner when they are trying to fulfill 1,000 cupcakes Andy shows up to help and they talk in the kitchen. They have a moment and says they love each other, even though they broke-up.

Caroline needs a recommendation for a grant and she goes to Andy for his signature but he moves away without a peep and uses Amir's help to leave. Caroline then goes to see a psychic to tell her about her love life future. She goes to see if there will be more men in her life or Andy was the only one for her.

And the Worst Selfie EverEdit

Caroline and Andy have sex, which unfortunately leads to Caroline developing a rash, who thinks it may be herpes. Caroline also wants to text Andy about getting together, and Max reveals to her that Andy is not dating just one girl, but several. Caroline is convinced that one of Andy's friends has given her herpes and meets with him at a local coffee shop to tell him so. Andy tells Caroline that he has only slept with two other women and will get tested. He also tries to assure her not to go to the worst-case scenario. In the end, Caroline finds out that she doesn't have herpes, just a reaction to a cheap fabric softener she used to wash her sheets.

1 of 9
Add photo
Retrieved from "https://2brokegirls.fandom.com/wiki/Caroline-Andy_Relationship?oldid=17029"
Community content is available under CC-BY-SA unless otherwise noted.