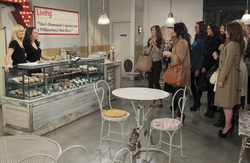 Max's Homemade Cupcakes was which was bought by Max Black and Caroline Channing for $20,000.

And the Candy Manwich[]

After seeing two girls having fun at their restaurant, they decide to have fun themselves. Max takes Caroline to a Soup Kitchen. After much discussion, they decide to go in, where the waitresses are nuns. She tells them that there are only four things available to eat.

After eating Sloppy Joes, Caroline says this is the best horrible thing she's ever eaten. After a few minutes later, Caroline vomits in Andy's store. After vomiting, she said she was fine and three minutes later she was vomiting again on the floor.

And the Egg Special[]

Andy is telling Max and Caroline that people broke in tonight and a bunch of people got shot, and apparently it was a drug deal gone wrong. They said it was a bloodbath, and they pulled many bodies out of it. Max then tears down the 'crime scene' yellow and black tape and goes in. Andy then leaves which leaves Max and Caroline to talk.

Caroline then states that this should be their shop: Max's Homemade Cupcakes. Max then states that they don't have the money, but Caroline adds that because there's just been a tragedy, it'll be cheaper. She also says that the blurb is going to help them get money, and then Max asks if they're ready or not. Caroline says this is a big step, but they can handle it.

And the New Boss[]

They finally buy it and paint it up. Max and Caroline hire an intern to do the dirty work for them in order for college credit, but Max has a problem with being a boss. The intern, Ruth, was meant to kill all the rats they saw but since Max was too shy, Caroline kills them all. They then go shopping for items to put in their new shop, they find an arrow which lights up and some chairs and tables.

And the Big Opening[]

Max and Caroline open their store out to the public with a party. The shop was packed, which meant loads of people came. Caroline stated that she gave out business cards to many people in the line, which meant good business for them. After the party, Caroline and Andy go to the shop and clean up the mess. The first day of business is slow, with Johnny only buying 4 cupcakes. When Max breaks up with Johnny, the business still remains slow.

And the Silent Partner[]

When Sophie loses her dream, Max invites her to be a silent partner in the cupcake shop. Caroline disapproves. When they reach the shop, they see Sophie's chandelier which she was going to use in her dream house in the middle of the cupcake shop. Surprised, they went to see Sophie who had brought out hoagie and pickled eggs. Sophie then realizes that this is their dream not hers and she should leave. She then walks away dressed in a cupcake outfit.

And the High Holidays[]

The rent is due in and the girls haven't paid it yet. They do the best they can to get money, but it isn't enough to cover next month's rent. The landlord comes into the shop and the girls jump out of the window and hide. Caroline doesn't wanna ask for money from Andy, so Andy offers him and she declines. Han, Oleg and Earl come in and give what they got and Han insists they are all family. They hug it all out, and Caroline reassures Max they are going to make it.

And the Bear Truth[]

A bride is getting married so she chose Max's Homemade Cupcakes to cater for her. She tries all the cupcakes but Max thinks she is lying. Later on the brings her bridesmaids to taste the cupcakes too.

And Too Little Sleep[]

Caroline gets a call to order for 1000 cupcakes and she agrees. As her and Max are so tired, they diner gang decide to help them. Earl is on the batter, Max and Caroline are on the decorating part of the cupcakes and Oleg is in the baking night. They are using the diner because Caroline broke the oven in the kitchen. When they finish, Max tells Caroline she had lost her earring, and they suspect it's in the batter. Not being there, they assume its in the already-made cupcakes. They tear it up and find it's not there and they re-do it. Andy comes and helps and they finish it. They then get paid $4,000 and they go home to sleep.

And the Psychic Shakedown[]

It is revealed that they steal things from the diner so that the cupcake shop can grow. They also use the rest of the diner gang to cover them up so they don't get caught.

And the Broken Hip[]

Max renames cupcakes to attract 'hipsters' to come and buy things from the shop. It goes well because the shop is filled with people. Later on outside a puppeteer is repelling customers to come into the shop with his puppet, and for the good of the shop they tell him to go away. He then comes in and slips on a muffin and then breaks his puppet. He then files a lawsuit on the shop and they persuade him to drop the charges. Then they pay $1000 to stop him pursuing it, and he leaves the case alone.

Caroline comes in and tells Max they are getting evicted. They rip it up and a real estate agent comes into the store, wanting to buy it. They decline but they request $25,000 In this episode, the shop is taken away from the girls. Max insists they take the neon arrow sign. We also learn that there is a ceiling fan in the shop, after it falls on a car that crashes into the shop.

And the Window of Opportunity[]

After Max gets electrocuted, Caroline opens the shutters to bring in air. A hipster than comes up to the girls, and ask them if it was a shop, and if they were selling anything. They say no and then Max gets the idea that the space could be the next Max's Homemade Cupcakes. Caroline agrees saying that they are starting from the bottom, so the only way to go is up if the shop is there. The episode leaves there but the future of the shop remains unknown, though the last few minutes of the episode hints that the shop will be there.