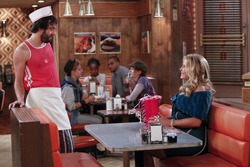 Started Dating
And the Candy Manwich
Intimacy Level
In love, Sexual
Dating Status
Married since And the Disappointing Unit
Ship Name(s)
Soleg
Been Together
24 Episodes

Sophie-Oleg Relationship is the relationship of Sophie and Oleg, which was formed in "And the Broken Hearts". They broke up in "And the Window of Opportunity", but soon got back together, and later engaged. They moved in together in "And the Move-In Meltdown", and the two were married in "And the Disappointing Unit".

Sophie and Oleg meet for the third time. Oleg gives Sophie a heart shaped box of chocolates for Valentines day to try to win her over.

Sophie and Oleg meet for the third time. Oleg gives Sophie a heart shaped box of chocolates for Valentines day to try to win her over. but sophie says oh and is looking very fucking sad so max calls oleg a bitchy cook\chef its over

Sophie enters the diner, and Oleg gives her treats. He also gives her a toothbrush to put at her place because they are now exclusive. This makes Sophie laugh because she doesn't think they are exclusive. Oleg goes to Caroline for confirmation and she agrees but Oleg walks away, unimpressed. We next seem at the diner where in Oleg's chef window he informs Sophie he has big plans. A woman then enters into the shop looking for Oleg, which makes Sophie angry. Sophie confronts the woman and scares her off, causing Caroline to ask her to admit her feelings. She replies saying she doesn't want him, but from where she comes, they never throw anything away.

And the Window of OpportunityEdit

Sophie comes into the girls' apartment to sell some items for their yard sale. She donates some of Oleg's stuff because he's getting too comfortable. She then tells the girls' he needs to stop or she might break up with him. The girls' then see Oleg in the kitchen when he is dressed in Han's assigned clothing. Caroline spills that Sophie is feeling uncomfortable there and she tells him to change. He angrily snaps back that he keeps changing, prompting him to cheat on Sophie. Sophie is mad at this, and breaks things from Max's apartment.

Oleg, Max, Caroline and Han go to see the new furnished back room. They give their opinions and when they open the door they see Sophie. She says her and Oleg are friends, and they win the award for not having any drama. They reveal that they relieved their anger by breaking valued possessions. They call each other friends, and Oleg walks away. There is a deleted scene in Max's Apartment with the two of them.

Oleg asks Max and Caroline to find out if Sophie is over him or not, when they ask Sophie she says she is and that she had sex with a stranger all night on a stoop in Staten Island. The next day at the cupcake shop Oleg asks if they asked Sophie yet, Caroline explains that they have and that Sophie has moved on. When she mentions Staten Island Oleg gets upset, he wanted to travel the world with Sophie and she's gone to the Island by herself. He locks himself in the cupcake shops closet, barely holding back tears.

Later on Oleg shows up with a young woman and says that he had sex with her all night and that the girls should tell Sophie about it, because he's moved on too.

And the Past and the FuriousEdit

Oleg wants to propose to Sophie, and has gotten her a ring. He decides that he wants to propose in one of three places. The place where they first met. The place where they've had sex the most often. Or the place where they've had sex the most recently. Sophie realizes that those places are all the same; her booth, the booth in which she's currently sitting. He tells her that's right, and gets down on one knee. He asks her to marry him, and she tells him that she was planning on saying no and making him beg for a few hours but she loves him too much, and agrees to marry him.

Oleg moves in with Sophie.

Retrieved from "https://2brokegirls.fandom.com/wiki/Sophie-Oleg_Relationship?oldid=15202"
Community content is available under CC-BY-SA unless otherwise noted.